Our Most Popular Models

View
Sort by
Information about the ranking of search resultsLearn more 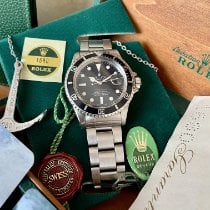 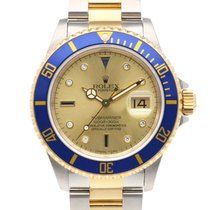 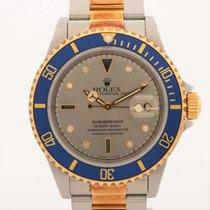 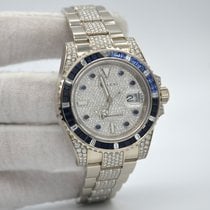 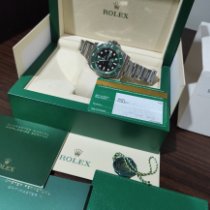 Chrono24 Buyer Protection Has You Covered

The Rolex Submariner: The Diver's Friend

The Rolex Submariner was one of the first diving watches. The high-end tool watch is still considered the gold standard today, winning over enthusiasts and collectors alike with its iconic design. What's more, the watch makes for a sound investment.

Rolex released its first Submariner in 1953. The Swiss manufacturer initially developed the watch as a specialist tool for professional divers, standing out from the crowd with its large luminous hands and indices, rotating bezel, and increased water-resistance. The watch's popularity is unwavering, and it holds the title of "diving watch archetype" to this day.

Rolex regularly updates the Submariner on account of its tremendous popularity. However, you won't see much change in the watch's appearance; the most extensive modifications are usually hidden inside the case, as we saw with the eight new Submariner models Rolex revealed in 2020. While the case design of these timepieces differs only slightly from previous versions, they are fitted with brand new in-house calibers.

Despite its functional tool watch design, the Submariner is the perfect accessory for both formal wear and casual attire, no matter if you've opted for a vintage or more recent model. It is exactly this versatility which has put the Submariner in the Rolex hall of fame. However, high demand coupled with low availability in brick-and-mortar stores have resulted in prices for Submariner models spiking considerably on the secondary market. Current references are now being sold at rates around 80% higher than their respective list price. Particularly popular pieces such as the green "Hulk" and the rare COMEX models have doubled or even tripled in price in the last two years alone. This level of appreciation also makes the Submariner a very attractive investment.

Reasons to Buy a Rolex Submariner

How much does a Rolex Submariner cost?

Rolex Submariner Date models with the reference numbers 16610LN, 116610LN, and 126610LN are all similar to the models above, but as you can probably guess, feature a date display. Listings for these models on Chrono24 cost between 17,700 USD and 18,700 USD. Collectors are particularly taken with green Submariner Date models, so you can expect to see the "Kermit" and "Hulk" fall within a price range between 26,000 USD and 34,000 USD.

In general, both new and used watches have been consistently rising in value in recent years. Market prices rose 25-60% in the two-year period from May 2020 to May 2022.

Prices for vintage watches are also on the rise, although to a lesser degree than those for current models. In fact, the value of vintage Submariners increased by about 7-10% on average in the last two years. However, looking at these watches as long-term investments paints a different picture. Take for example the Submariner 5508: In 2012, you were looking at a price around 13,200 USD, but a decade later, the market price has more than doubled to roughly 29,000 USD.

Rolex announced eight new Submariner models in September 2020. They all share a slightly larger Oyster case that now measures 41 mm in diameter. The manufacturer also tweaked the lugs, which are now narrower than those of previous models. What's more, each watch boasts a new in-house caliber, with the caliber 3230 powering the No Date models and the 3235 ticking away inside the Date editions.

The Rolex Submariner No Date is the perfect choice for purists. Just like the original Submariner, which also did away with the date display, the ref. 124060 is available exclusively in stainless steel with a black dial and bezel. The price for this watch on Chrono24 is approx. 16,500 USD, whereas the list price is 8,100 USD.

Since the latest release in 2020, Rolex fans have seven Submariner Date models to choose from, two of which are stainless steel. Those looking for a more understated design are sure to fall for the ref. 126610LN with its classic black bezel and dial. The reference number 126610LV, on the other hand, features a green bezel and black dial, and has been christened the new "Kermit" of the Submariner collection. Prices for these models are similar to those for the No Date: The ref. 126610LN sells for around 18,500 USD, which is again considerably higher than the list price of 9,150 USD. The new "Kermit" (126610LV) is particularly coveted among collectors and has more than doubled in value since its release. As of mid-2022, the Rolex Kermit costs around 26,000 USD.

The reference numbers 126613LB and 126613LN feature a two-tone design in yellow gold and stainless steel. The 126613LB model boasts a blue dial with a matching blue bezel, while these details are black on the 126613LN. Two-tone watches have been back in style for some time now, which is reflected in the prices for these two Subs. The list price for both models comes in at 14,300 USD. However, if you want to skip years on a waiting list, expect to pay between 21,500 USD and 23,000 USD on the open market.

Fans of solid gold timepieces should take a closer look at references 126618LB and 126618LN. These models are made of 18-karat yellow gold and come with coordinating blue or black dials and bezels, respectively. Prices for these gold Rolex Submariners are also on an upward curve, with watches now selling for between 55,000 USD and 58,000 USD, which is quite a jump from the official retail price of approx. 36,950 USD. The same can be said for the white gold ref. 126619LB, which has a blue bezel and black dial. As of mid-2022, this watch costs around 51,000 USD, more than 25% over its list price.

Like most vintage Rolex watches, older Submariner models are highly coveted. Two examples of popular reference numbers are the 5512 and 5513, which were introduced all the way back in the late 1950s and early 1960s, respectively. Even though both models were produced for a number of years, there are currently very few pieces available on the market. You can get a ref. 5513 for around 15,000 USD, while you will need well over 30,000 USD for a ref. 5512 in good condition. The ref. 5512 has almost tripled in price over the last ten years, but the ref. 5513 won't be left in the dust: It's risen to almost double what it cost in 2012. The odds are good that this trend will continue, meaning that both models are an attractive investment opportunity.

Timepieces with the reference numbers 16800 and 168000 from the 1980s are more affordable. These two Rolex Submariners have a date display and are somewhat easier to get your hands on than their older sister models. This has not gone unnoticed by collectors, leading to a strong upturn in demand in recent years. Of course, this means that the models are also appreciating in value. In mid-2022, you're looking at around 13,000 USD for a ref. 16800, whereas this model changed hands for approx. 10,000 USD in 2020. It's a similar story for the ref. 168000, which jumped from approx. 8,500 USD to 15,000 USD in the same period.

In November 2001, Christie's auction house sold the original Submariner 5513 from the 1973 James Bond movie "Live and Let Die" for 25,850 GBP (approximately 38,000 USD at the time). The same watch went on the auction block again in 2015, this time at Phillips. When the bidding was all said and done and the premiums added, it nabbed an impressive 365,000 USD. That means its price increased almost tenfold in 14 years.

The "James Bond Sub" ref. 6538 is another popular model among collectors. Sean Connery wore this timepiece as James Bond in 1962's "Dr. No." If you're lucky enough to find one of these watches, you'll need well over 105,000 USD to call it your own.

Some Rolex watches are irresistible to fans and connoisseurs alike. The "Red Sub" is one such highly sought-after collectible. Rolex produced the Submariner with reference number 1680 between 1967 and 1980. The word "Submariner" was written in red on the dial until 1974, thus earning it the nickname "Red Sub."

Between 1967 and 1974, Rolex produced the Red Sub with numerous dial designs, labeled Mark I through Mark VI by fans. At first glance, the models may seem identical, but the trained eye will notice subtle differences in the typography and whether the depth rating on the dial is indicated first in meters or feet. Watch enthusiasts are just as enamored of models with tropical dials where the watch's dial and bezel fade to brown over time.

Depending on the condition and dial design, prices for Red Subs can fall anywhere between 31,000 USD and 64,000 USD. These watches are rare, so it comes as no surprise that they are very likely to increase in value. In the last 12 months alone, prices have risen 50% on average.

Many collectors dream of getting their hands on one of the Submariner models Rolex developed specifically for the Compagnie maritime d'expertises (COMEX), a French company renowned for their underwater exploration technology. These watches (ref. 5514) were produced from the 1970s to the 1990s and have since performed well financially, making them sound investment pieces. Two years ago, you could have bought a ref. 5514 for no more than 49,000 USD. In mid-2022, however, listings on Chrono24 are closer to 136,000 USD.

The Submariner has spent the last six decades making watchmaking history. It has also developed into an icon and one of the most well-known watches of all time. In 2012, the special Deepsea Challenge model plunged into the Mariana Trench, reaching an impressive depth of some 36,000 ft (nearly 11,000 m). The predecessor of the very first Submariner was the ref. 6200. This timepiece was water-resistant to 100 m (10 bar, 328 ft) thanks to its distinctive Twinlock crown. It had a bidirectional bezel that enabled divers to keep track of the length of their dive with a quick glance.

Rolex took the advice of René-Paul Jeanneret when designing the Submariner. The former Rolex director was an avid recreational diver and gave helpful suggestions for the dial, bezel, and case. The watch survived various tests and 132 dives to depths of between 12 and 60 m (39 to 197 ft). It was even dropped on a concrete dock from a height of just over six-and-a-half feet (two meters) and continued to function. The only damage was the loss of a small part of the luminous material from one of the hands. The successor of the original Submariner was water-resistant to 200 m (20 bar, 656 ft) and used to be the official watch of the British, Australian, and Canadian navies.

Today's Submariner models look almost the same as early editions of the classic diving watch. Over the years, the case has grown, and a crown guard was added (in 1959) to protect the screw-down crown. In 1966, a version with a date indicator joined the collection. Other changes or additions have been minor, such as polished bracelet components and cases or blind lugs (i.e., lugs that are not drilled through all the way). Although its design is from the 1950s, the Rolex Submariner remains a modern timepiece.

Over time, these automatic watches have progressed to a water resistance of 300 m (984 ft) and feature rotating bezels with 120 clicks. The bezel can only be turned counterclockwise, which is a requirement for all modern diving watches. Its insert is made of Cerachrom ceramic, which is particularly scratch-resistant. Rolex's proprietary luminous material, Chromalight, fills the bezel's zero marker. This substance glows blue in the dark and is brighter than Super-LumiNova. Furthermore, Rolex's watchmakers add platinum or gold dusting to the bezel's numbers and indices.

Both the index markers on the dial and arched hands are made of gold. The hour and minute hands glow in the dark, as does a spot on the second hand. Compared to earlier models, the sapphire glass barely sticks out, protecting it from jolts. A Glidelock clasp enables the wearer to adjust the size of the bracelet in 2-mm increments. Therefore, the watch fits just as well on bare wrists as it does over wetsuits. The clasp, which is slightly larger than those found on previous versions, also features a safety mechanism, ensuring it can't be opened accidentally.