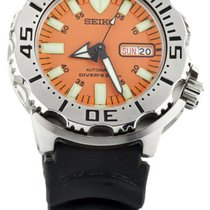 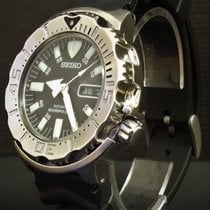 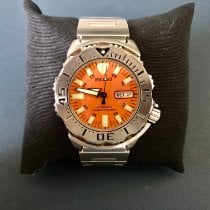 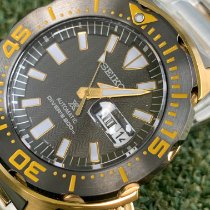 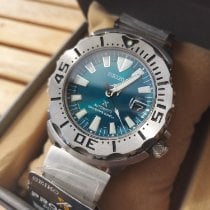 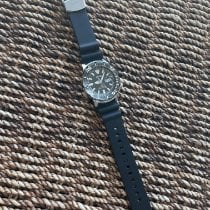 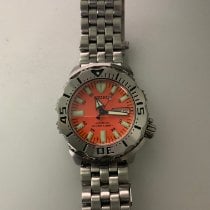 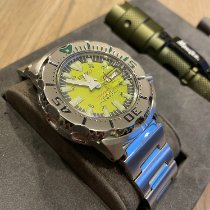 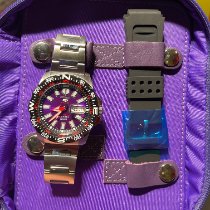 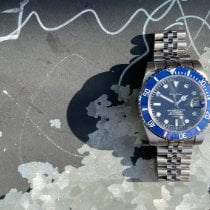 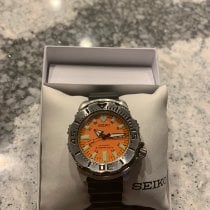 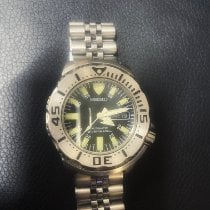 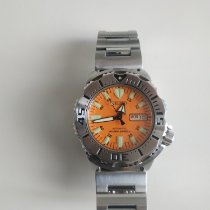 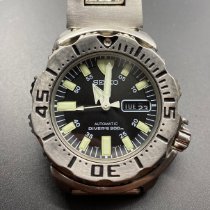 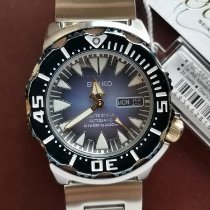 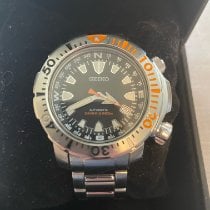 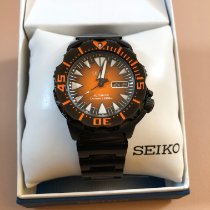 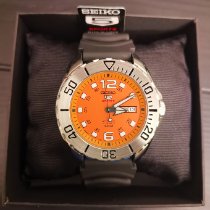 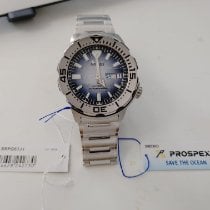 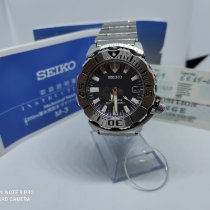 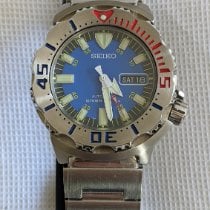 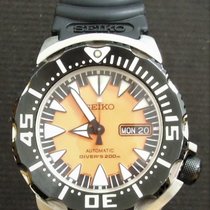 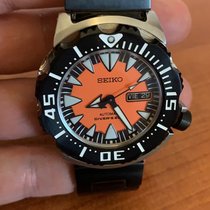 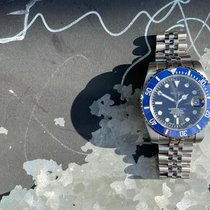 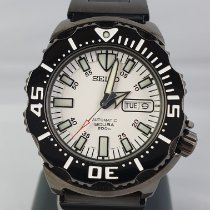 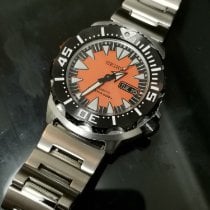 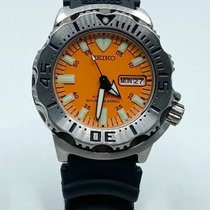 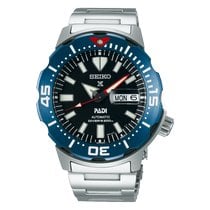 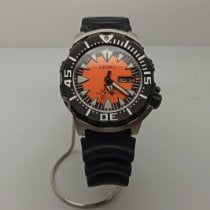 49
LV
Next
Save this search

A Monster Among Diving Watches

Diving watches from the Seiko Monster collection have a strikingly masculine design, something unique in the world of diving watches. Extremely limited models are hotly sought after among Seiko fans and have recently experienced an increase in value.

The automatic diving watches from the Seiko Monster collection are especially eye-catching. This is due to the sometimes colorful, extravagant design and a unidirectional bezel with a look inspired by shark teeth, making them unique in the watchmaking world. In the past, the Japanese watch manufacturer Seiko brought numerous variations and three generations of the Monster to market. Despite this, they ceased production, making some reference numbers into highly coveted collector's watches. Even though various models were produced thousands of times over, often only a few or even no examples are available.

Limited editions, such as the so-called "Zamba" with only 2112 pieces, are especially interesting. Features of this diving watch include a black case and dial, different colored indices, and a red leather band. It is also protected by Hardlex glass with a cyclops lens over the day-date display. The red markings for the first 15 minutes on the unidirectional bezel are particularly attractive. Since the Seiko Monster "Zamba" is so rare, prices have risen above 1,000 euros.

What does a Seiko Monster cost?

Prices for a Seiko Monster start around 300 euros and currently go up to almost 2,000 euros for rare, limited edition watches. It is even conceivable that the prices for rare models will continue to rise in the future. Examples of extremely limited Monster watches are the so-called "Zamba" with the reference number SRP319 and "The Sun" with the reference number SRP459 and only 2323 pieces. Both models belong to the second generation, which is why the automatic caliber 4R36 with a stop-seconds mechanism and manual winding option powers them. "The Sun" sells for about 1,500 euros when new and with its box and papers. You will also find the so-called "Snow Monster" with the reference number SKZ331 and a limited run of 2555 pieces in this price range. The "Snow Monster" is recognizable by its white/blue dial and the light blue "Limited Edition" lettering above 6 o'clock and above the "Automatic Diver's 200m" inscription.

The first generation of Seiko Monster watches laid the groundwork for the collection's success and unique design, which sets it apart from other diving watches. The first two models have the reference numbers SKX779 ("Black Monster") and SKX781 ("Orange Monster"). The letters "SKX" makes the relationship to the popular Seiko Diver's SKX007 and SKX009 clear. They are also driven by the same affordable but reliable automatic caliber 7S26. This movement has a power reserve of around 40 hours and displays the day and date at 3 o'clock.

The "Orange Monster" is probably the most iconic Seiko Monster model thanks to its conspicuous orange dial. The "Black Monster" is somewhat less conspicuous because of its black dial. Both models have generous amounts of luminous material on their hands and indices, making them very easy to read in the dark. A feature of both watches is the short, arrow-shaped hands and the marker reminiscent of a sword's tip at 12 o'clock. The toothed bezel is easy to grip, making it simple to use. With a diameter of 43 mm, Monster watches aren't exactly small. Nevertheless, they are also suitable for slimmer wrists due to their short lugs. The case is also quite flat at 13 mm, making it possible to wear these diving watches with long sleeves.

Even though the "Black Monster" and "Orange Monster" weren't limited editions, there are currently only a few models available on the used market. Prices sit between 200 and 400 euros. Limited editions, such as the extremely rare "Yellow Monster" with a yellow dial and a limited run of 300 pieces, are as good as impossible to find.

A New Caliber and Dial for the Second Generation

The caliber 4R36 entered the Seiko Monster collection with the introduction of the second generation in 2012. In contrast to the 7S26 used in the first models, you can also wind the 4R36 manually. When you pull out the crown to set the time, the second hand also stops. These two functions represent an upgrade in quality for the Monster, which is reflected in the price. Be sure to set aside at least 300 euros should you come across a "Black Monster" with the reference number SRP307. The newer "Orange Monster" has the reference number SRP309 and sits in a similar price range.

The newly designed dials are the same in all of the second generation's designs. Their pointed hour markings bring to mind sharp fangs and reinforce the Seiko Monster's "aggressive" look. The so-called "Monster Dracula" or "Vampire Monster" is a fan favorite. Its white indices are trimmed in red and are reminiscent of a vampire's fangs. A "Dracula" with the reference number SRP313 is difficult to find and costs around 300 euros. The reference numbers SRP455 and SRP461, among others, are extremely limited and therefore interesting. The latter only had a run of 500 pieces, so you should buy one if you find it. This model is made of stainless steel and has a deep blue dial and blue bezel. The gold-colored crown and hands contrast nicely with the blue design.

If you like dark blue bezels and could warm up to an entirely black watch design, we recommend the reference number SRP581. This variant is not limited and thus easier to find. Prices sit between 300 and 400 euros. There are 1,000 SRP455 watches, making them more difficult to find. The reference number SRP657 had a run of 1,750 watches and is also known as "Monster Royal Blue". You can recognize this stainless steel watch by its blue/white dial design and the cyclops lens over the day-date display. You can buy the SRP657 for about 1,400 euros.

Even Higher Quality in the Third Generation

Seiko changed movements once more in the third Monster generation. Since then, the even better caliber 6R15 has been ticking in these eye-catching diving watches. Like the 4R36, this movement has a stop-seconds mechanism and manual winding option; however, its power reserve is around 50 hours. This point is especially remarkable, considering it surpasses the power reserve of many standard Swiss movements by 10 hours. You can spot watches from the third generation of the Seiko Monster by their date display with a cyclops lens. The caliber 6R15 lacks a day display.

An example of the youngest Monster watches is the reference number SBDC023, an "Orange Monster". Prices start at almost 800 euros due to the better movement. The "Black Monster" SBDC025 costs about the same.

What caliber is in which Seiko Monster?

The success of the Monster Collection prompted Seiko to produce similarly conspicuous watches in the affordable 5 Sports sports watch collection. Fans lovingly refer to these watches as "Baby Monsters" since they aren't true Monster timepieces. Since the "Babys" are only water resistant up to 100 m (10 bar), they are suitable for swimming but not diving. If you are on the lookout for a professional Seiko diving watch, have a look around the Prospex collection. Top models from this collection are water resistant up to 1000 m (100 bar).

The caliber 7S36 ticks inside all the "Baby Monster" watches. It is an advancement of the 7S26, though it is missing the stop-seconds mechanism and manual winding option of the caliber 4R36. The 7S36 is a proper workhorse, ticking reliably in millions of watches. You can occasionally find examples with the reference number SNZF47 for less than 200 euros. The "Orange Baby Monster" SNZF49 sits at a similar price point of around 200 euros.