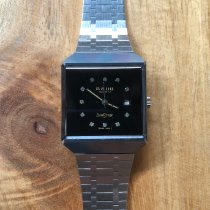 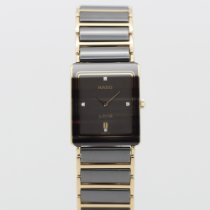 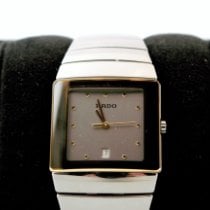 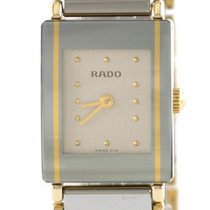 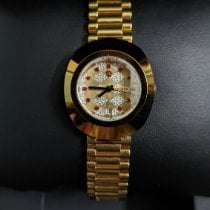 The DiaStar 1 helped the Swiss luxury watch manufacturer Rado cement its reputation as a pioneer of materials research. Carbides and ceramics not only make their watches scratch resistant and light but also give them an entirely unique look.

Rado started something of a revolution with the release of the DiaStar 1 in 1962. They were one of the world's first watch manufacturers to construct watches using materials intended for the tool industry. The case of the DiaStar 1 was made of a carbide composed of tungsten carbide and titanium. Their use of sapphire glass was also new. Together, these materials gave the watch unprecedented hardness and scratch resistance.

As time went on, Rado established themselves as pioneers of using unusual materials, such as ceramic and specially developed alloys. They would go on to release a whole line of watches with the affix "DiaStar", including the Ceramica, the Integral, and the Sintra. These models have since developed into their own collections.

How much does a Rado DiaStar cost?

It wasn't just the unusual materials that attracted attention to the DiaStar 1 upon its release: Its design was also far from conventional. The round dial was encased by an extra wide, oval bezel, which covered the lugs like a shield. This meant that the three-piece metal bracelet appeared to come directly out of the watch itself. The watch came in men's and women's versions with or without gold plating and in numerous dial designs, some of which included diamonds. A date display was a part of the standard model. Some models also featured a day display.

Prices for a DiaStar 1 largely depend on its age, condition, and movement. On Chrono24, you can find pre-owned automatic models from the 1980s for under 300 euros, while quartz models from the 1970s may cost 100 euros more. You'll need to shell out a bit more for pieces from the early 2000s, which cost between 600 and 700 euros.

Rado has been selling the DiaStar 1 under the name The Original since 2013. The main difference between it and the first DiaStar is its use of an improved carbide. Otherwise, the current collection does honor to its name: The case is almost an exact replica of the original model from the '60s. The dial design also relies heavily on that of the original collection and ranges from elegantly reserved to intricately decorated, some even with diamonds. The date and day displays also remain. The list prices for watches from the Original collection sit between 1,000 and 1,300 euros, while online prices can be much more affordable. Depending on the model, plan to spend between 750 and 890 euros for one of these watches in mint condition. If you would prefer the recently released New Original Chronograph, expect to pay approximately 1,050 euros.

The DiaStar and Its Relatives

In 2011, Rado introduced an updated version of the DiaStar 1 called D-Star. The watches in the D-Star collection also have oval bezels, though they are much smaller than that of the DiaStar 1. What's more, Rado has opted for modern dial designs and cases of black, white, or shiny metallic high-tech ceramic. You'll need to set aside between 600 and 890 euros for a quartz-powered D-star and between 900 and 1,100 euros for an automatic model.

Models from the D-Star 200 line are a bit sportier. They feature stainless steel cases and unidirectional ceramic bezels. The "200" in the model's name stands for its water resistance of 200 m (20 bar), which makes it a diving watch. Another difference between it and the standard models is the cyclops lens above the date display. Prices for the three-hand version of the D-Star 200 start around 1,400 euros for the model with a rubber strap. Models with a gold PVD coating and a stainless steel bracelet go for 1,800 euros. You can buy a D-Star 200 Chronograph starting at 1,900 euros.

Integral, Sintra, and Ceramica are all popular collections in the Rado catalog. At the beginning, they all included the word "DiaStar" in their names to indicate their use of unusual materials. However, this is where the parallels to the DiaStar 1 end. All of these models have a more or less rectangular case. Rado also constructs most of them out of high-tech ceramic. These timepieces all have one more thing in common in addition to their angular shape and unique materials: Their cases and bracelets seem to merge into one solid piece since they are usually made of the same material.

In the Integral collection, Rado skillfully combines black or white high-tech ceramic with stainless steel elements that are often plated in yellow or rose gold. These quartz-powered watches come in both men's and women's sizes. There are also models available with diamonds on the dial and case, which have names including the word "Diamonds" or "Jubile". You can get a pre-owned Integral starting at as little as 500 euros. Pre-owned models with diamonds start around 700 euros. Prices for mint-condition pieces range from 890 euros for standard models to 1,050 euros for Jubile models with diamonds on the dial. For a slightly more extravagant watch that also has diamonds on its case, you will need over 1,900 euros.

Rado has taken the integration of case and bracelet to a whole new level in the Ceramica collection. The original watches from 1990 were made entirely out of ceramic and featured a bracelet that was as wide as the case. Combined with the dial's minimalistic design and the shimmering black high-tech ceramic, this watch felt like one continuous bracelet. Its first update came in 2016 when industrial designer Konstantin Grcic made the bracelet somewhat smaller than the case. With its rigid geometric shape, minimalistic bezel, and black, white, or gray ceramic, this watch feels both futuristic and elegant at the same time. Plan to spend around 1,300 euros for a never-worn current model. You can find the older models with wider bracelets for as little as 1,000 euros.

The Sintra was first introduced in 1993. At that time, the case and bracelet were made of super-light titanium carbide. Over the years, its rectangular shape has transformed into more of a barrel, whose curved lines transition nicely into the updated bracelet. The Sintra dial has the typical Rado minimalistic design: Some models do without indices entirely and others use diamonds for hour markers. In addition to black and white, the Sintra is also available with a metallic shine or with gold plating. Pre-owned models in good condition start at just under 590 euros, while new models start around 1,200 euros.