The lion, the king of the savanna, is a symbol of strength, wisdom, and power. When a brand chooses a lion as its logo, you know it’s making a bold statement, and Grand Seiko is no different. The Japanese brand has upheld everything its lion logo stands for. With 60 years of history to look back on, this subsidiary of the Seiko Watch Corporation is a relative youngster in the watch industry. It is, therefore, even more remarkable that Grand Seiko has managed to create a model line that was so popular it warranted the creation of a whole new independent manufacturer. We’ve picked out a few of Grand Seiko’s major milestones on their way to international acclaim and paired them with some interesting Chrono24 insights to give you a better idea of what this brand is all about. 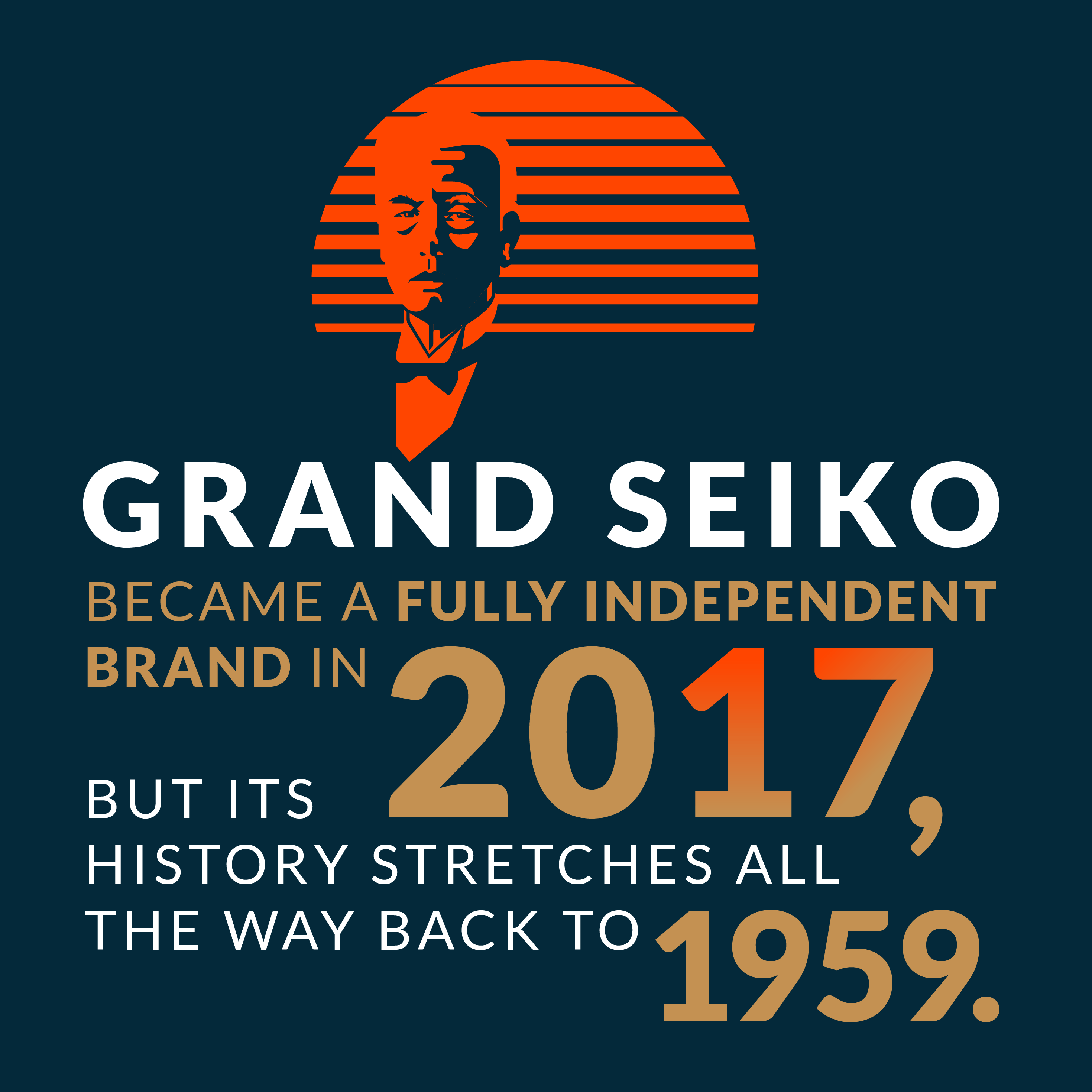 Grand Seiko’s history begins in 1959, the year before the release of the first official Grand Seiko Watch. Japanese watch manufacturer Seiko was already a well-established name in the industry, but it wasn’t known for producing high-end timepieces. They decided it was time to change that: To promote innovation and internal competition, the company had the Suwa Seikosha and Daini Seikosha watch factories each develop new Seiko models that would not just hold their own against Swiss timepieces but surpass them. They were aiming for nothing shy of perfection in technology, design, and durability. It didn’t take long for the first models to roll off the production line. 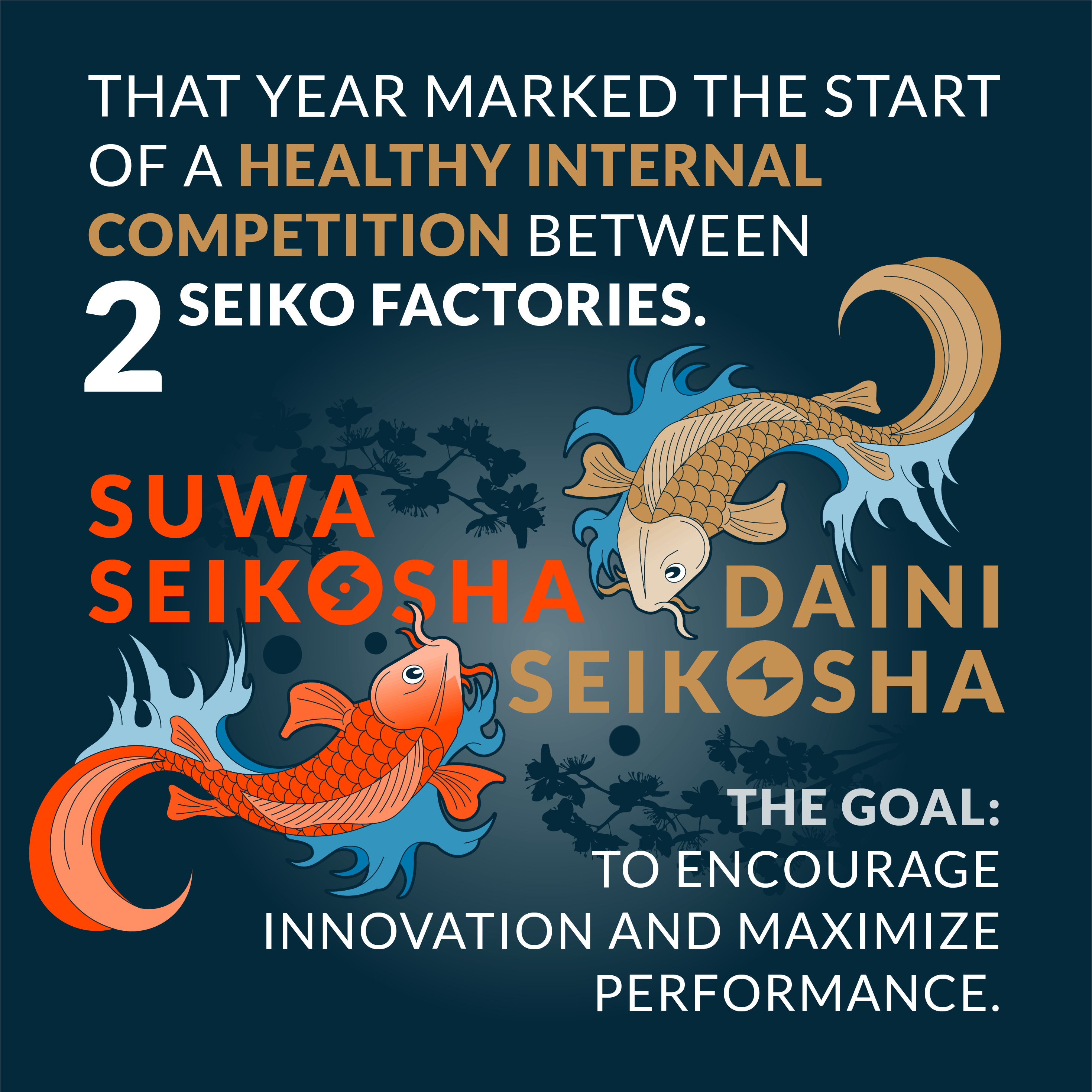 In 1960, Suwa Seikosha released the first Grand Seiko model with the reference number 3180. The watch is powered by the manual caliber 3180, which has a power reserve of 45 hours and deviates by no more than -3/+12 seconds a day. Most of the cases shine in gold-plated steel, though some examples featured platinum cases. The model name “Grand Seiko” was prominently featured at 12 o’clock. This position was later reserved for the brand name and the model name was abbreviated as GS at 6 o’clock. Early models bore the chronometer logo, but this was later discontinued because Grand Seiko watches were subjected to internal tests and standards that were in large part more rigorous and than those at the Official Swiss Chronometer Testing Institute. Thus, the watches ceased to have official COSC certification. 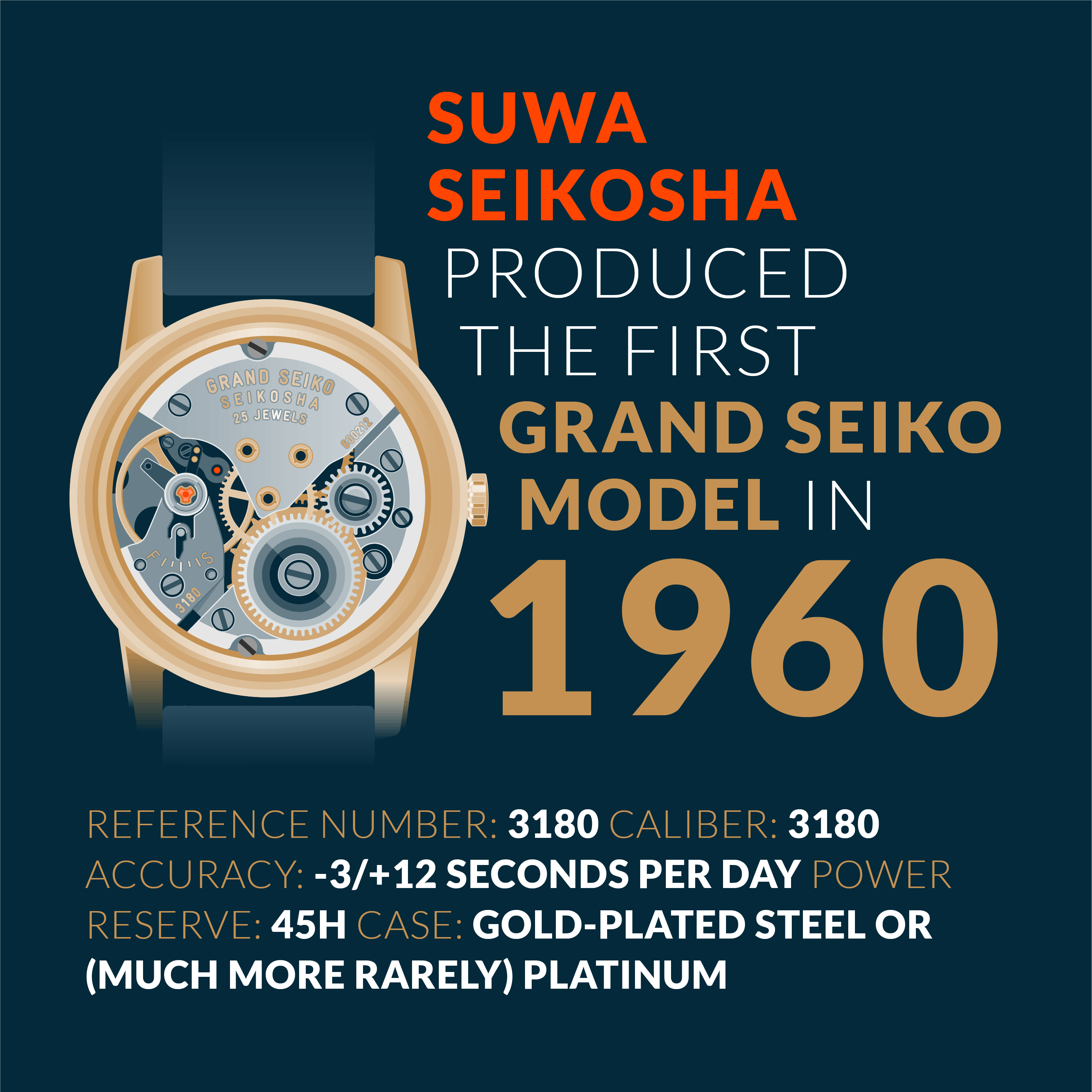 A few years later, Suwa and Daini Seikosha were permitted to participate in the Swiss chronometer competitions in Neuchâtel. Their poor performance in 1964 was a bit of a setback, but that didn’t discourage them. In 1967, Seiko returned with several models that placed in the top 10. The Grand Seiko 44GS was released in the same year, a move that marked a new set of standards for Seiko in many ways. At the time, the watch featured the most accurate manually-wound movement in the world with a frequency of 18,000 bph. In addition, the 44GS was the first model to embody Seiko’s new “Grammar of Design,” which consisted of three design rules and nine basic watch elements. Seiko proved their innovative spirit and stamina with the development of their Spring Drive technology for Grand Seiko models. Spring Drive is a hybrid technology that combines the charm of a mechanical movement with the accuracy of a quartz caliber. The mainspring is regulated by the frequency of a quartz crystal, resulting in an extremely precise timepieces that deviate by no more than +/-1 second per day. It would take 21 years to develop and another five to perfect. The first Grand Seiko watch to feature Spring Drive technology was the 9R6. 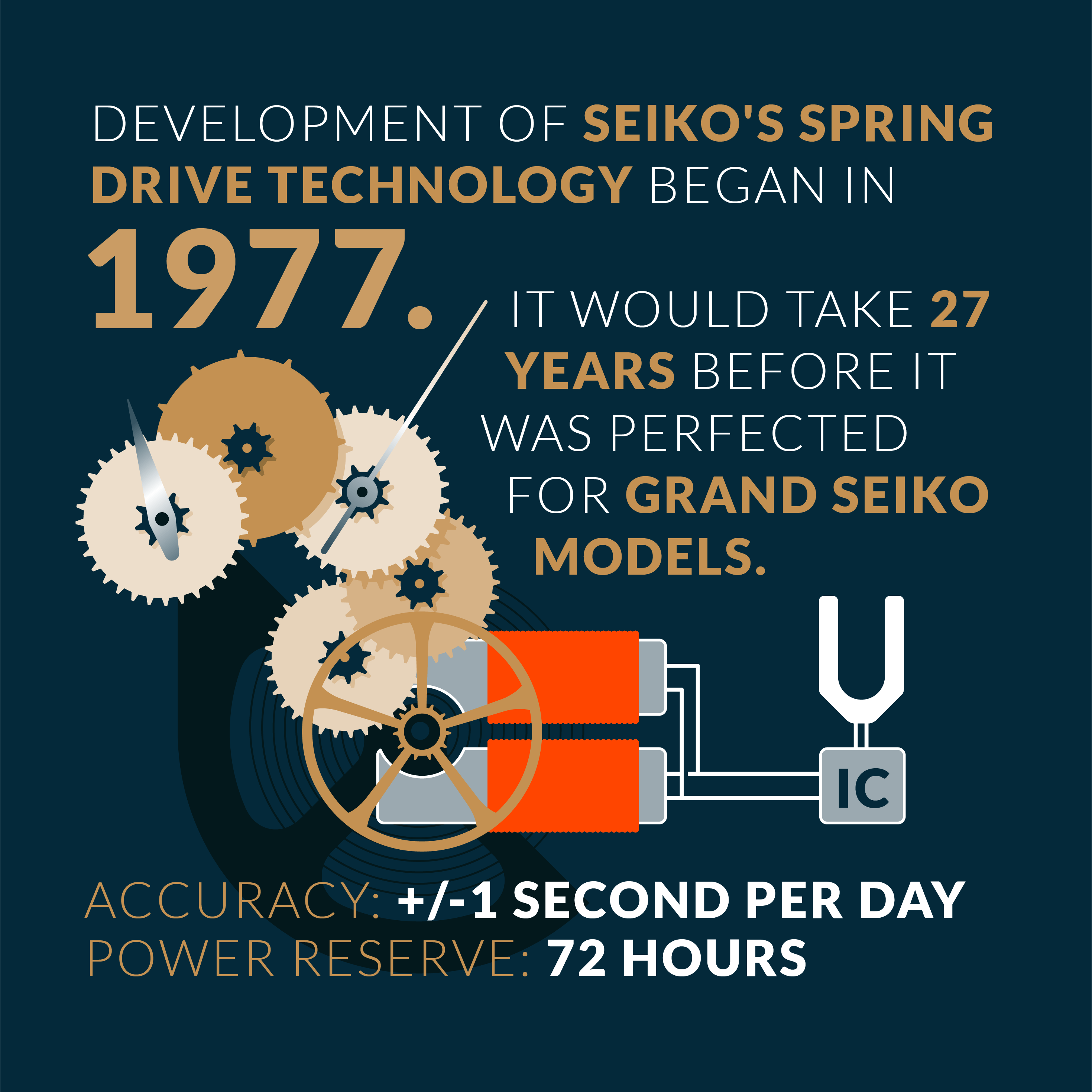 It’s no surprise that Grand Seiko watches are so popular on our marketplace considering the amount of passion and attention to detail that goes into each one. Our top seller is the Grand Seiko SBGA211 Snowflake, followed by the SBGV245 and SBGK005 models. Generally speaking, our users seem to prefer timepieces with automatic movements. Since 2019, 62% of all Grand Seiko watches sold on Chrono24 have had automatic movements, while just 26% have had quartz calibers. Manual movements come in at third with a 12% share of sales. 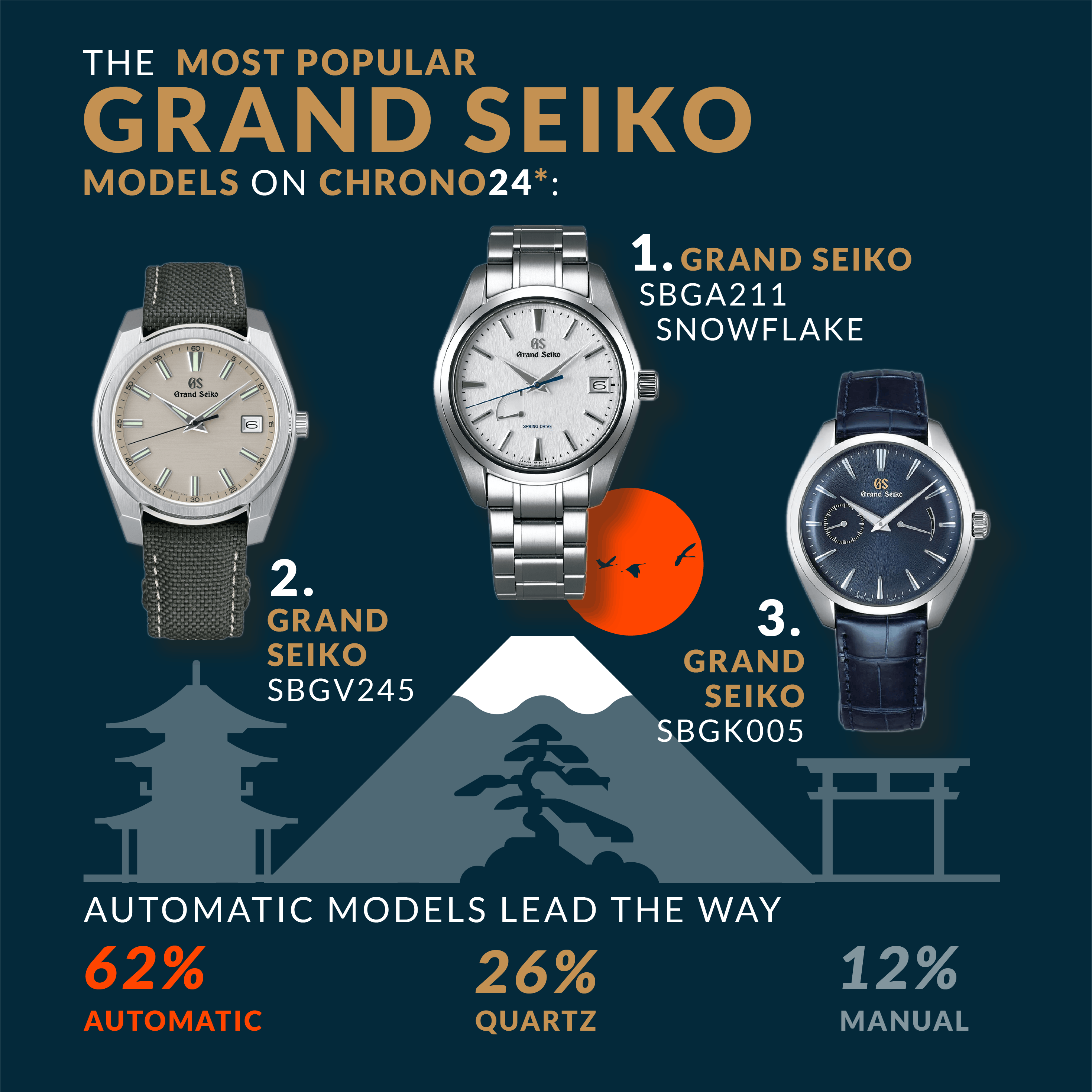 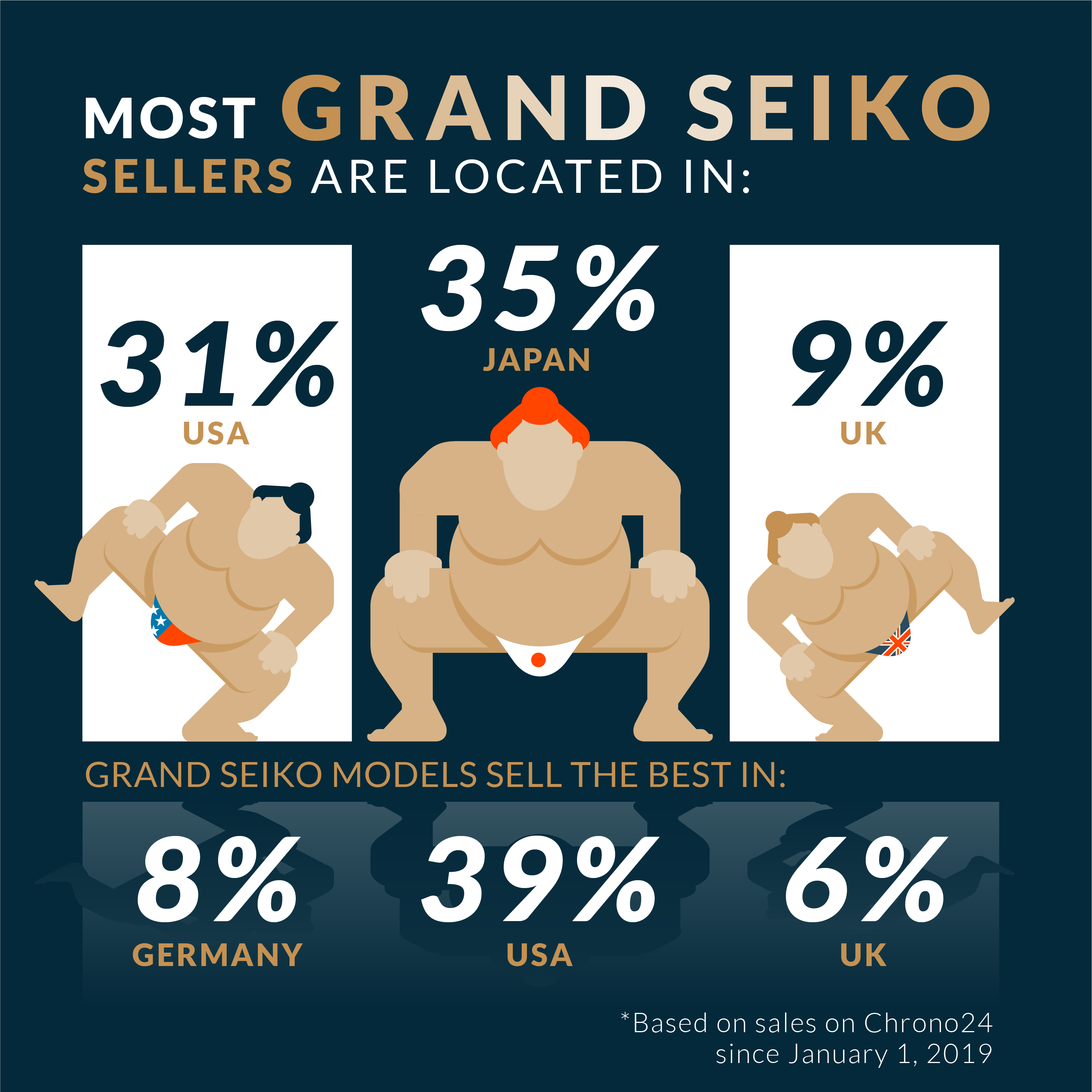 Grand Seiko: From a Single Model to a Luxury Brand

Which Grand Seiko models is the Chrono24 community wearing?

The team behind the Chrono24 Magazine consists of Chrono24 employees, freelance authors, and guest authors. They're all united by a passion for anything and everything… 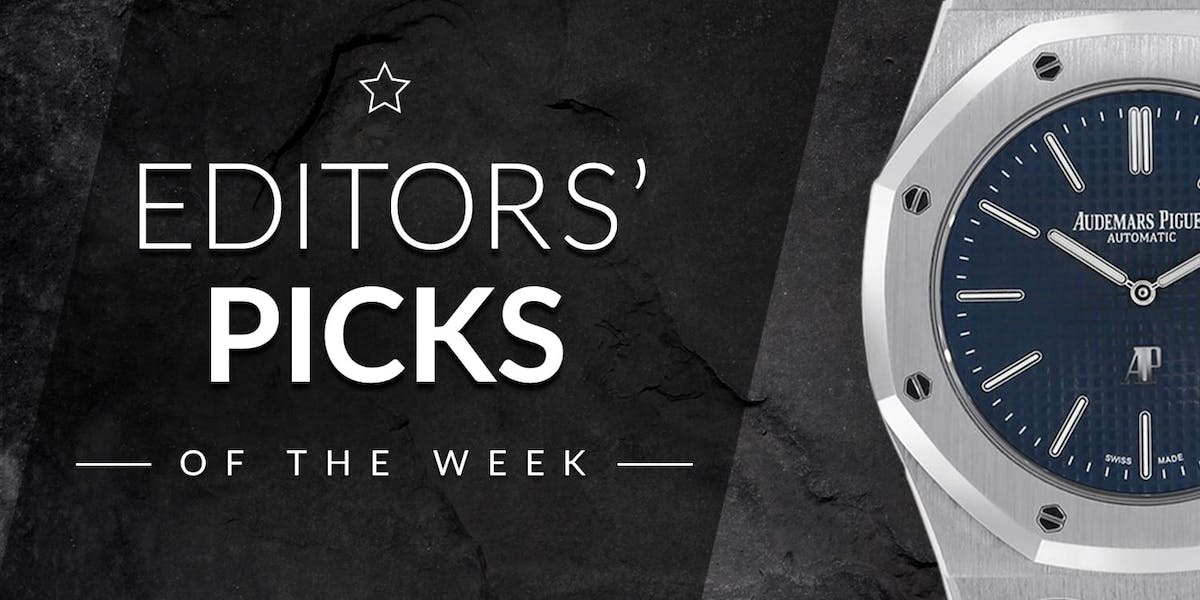