The Navitimer is probably the most successful watch ever produced by Breitling, a manufacturer located in the Swiss town of Grenchen. With its trademark multifunctional slide rule bezel, this distinctive chronograph is one of the world’s most well-known pilot’s watches. Over the years, Breitling has expanded upon the standard models with a series of reinterpretations. The Navitimer collection also saw Breitling graduate to a full-fledged watch manufacturer when the first model with the in-house caliber B01 made its debut.

About the Breitling Navitimer 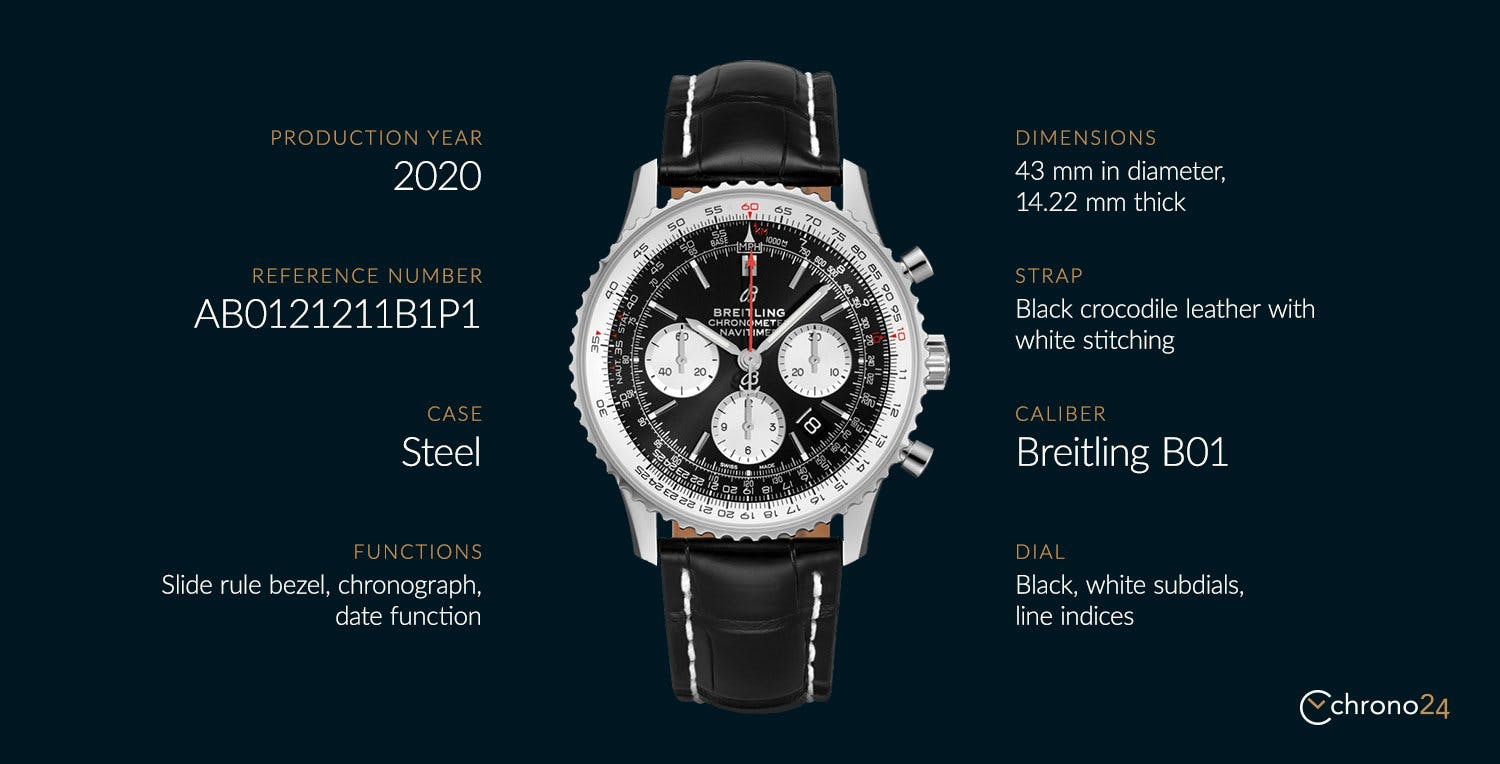 As its name implies, the Navitimer is a timepiece designed for navigation. This functional pilot’s watch has been around since 1952. It is the direct descendant of the Chronomat from 1942, a chronograph that also features a handy slide rule bezel. The Navitimer is like a small computer for the wrist, aiding in several different mathematical calculations. For example, a pilot can use it to determine their speed, rates of ascent and descent, and the aircraft’s fuel consumption.

Even though modern electronic instruments took over these roles long ago, the Navitimer still enjoys great popularity among pilots and celebrities. Actor and recreational pilot John Travolta combines the two and is one of Breitling’s most famous brand ambassadors.

The Most Important Navitimer References

One very popular version is the Navitimer Chronograph GMT 46, which is available in an array of dial colors with various armbands. For example, the ref. A24322121B1A1 features a black dial and a stainless steel bracelet. The 46-mm case and bidirectional rotatable slide rule bezel are also made of stainless steel. 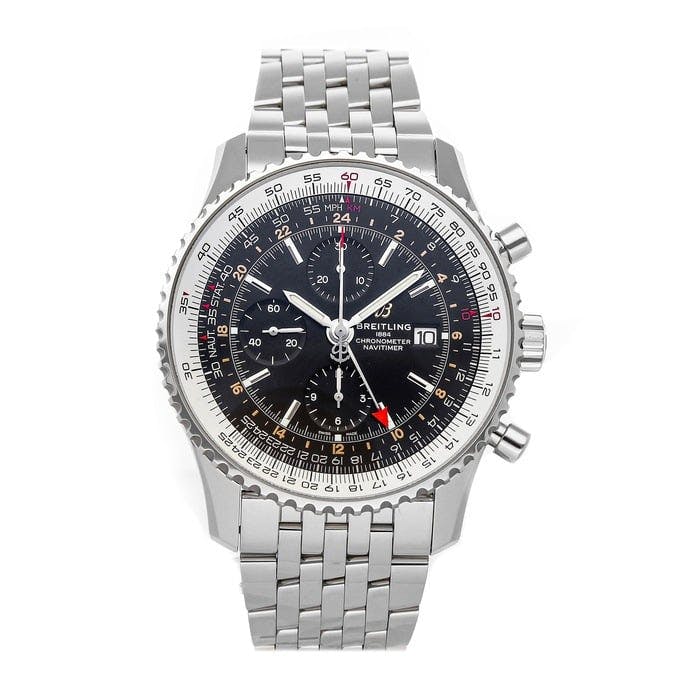 At the heart of the watch is the Breitling caliber 24, a modified version of the ETA 7754. This movement has central hands for the hours, minutes, chronograph seconds, and GMT function. The chronograph’s subdials are situated at 6 and 12 o’clock, while the small seconds sits at 9. This model also comes with a date display at 3 o’clock. The Navitimer is water-resistant to 30 m (3 bar, 98 ft), which ensures that a little splash of water won’t hurt it.

The Navitimer ref. AB0121211B1X1 is powered by the Breitling in-house caliber B01. At 43 mm in diameter, it is a bit larger than the standard, 41-mm models. This watch has a black dial with a white slide rule. Applied indices with glow-in-the-dark tips serve as hour markers. There are red accents on the chronograph seconds hand, as well as on the slide rule at 10, 35, and 60. The white subdials are positioned at 3, 6, and 9 o’clock with the date at 4:30. The watch is water-resistant to 30 m (3 bar, 98 ft) and comes on a black leather strap with white stitching. 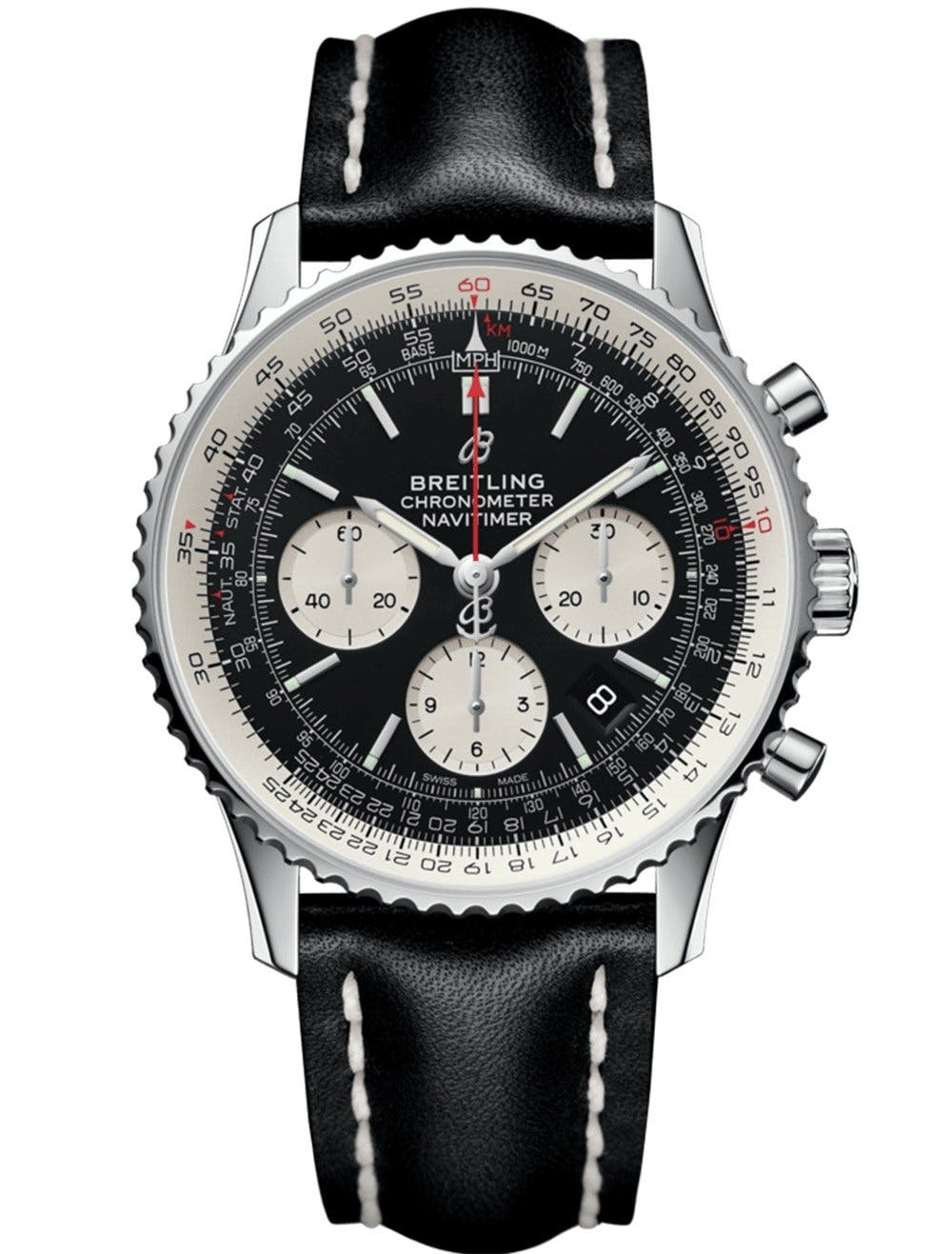 If you’d prefer a white dial with black subdials, you should take a closer look at the reference AB0121211G1A1. This version also comes with a stainless steel bracelet. Another variant of the 43-mm Navitimer bears the reference number UB0121211F1P2. This watch is identical to the other two references from a technological perspective but has some flashy details in 18-karat rose gold, including the bezel, the indices, and the hands.

In 2017, Breitling introduced the B03 Chronograph with split-seconds functionality (rattrapante in French). This elaborate complication of the caliber B03 features two superimposed chronograph hands that can measure elapsed times independently of one another.

Reference AB03102A1F1P2 is made of stainless steel and has a diameter of 45 mm. The dial in the color “stratos gray” has applied line indices with luminescent ends. The totalizers at 3, 6, and 9 are black, posing a subtle contrast to the gray dial. You’ll find understated red accents on the dial scales and the stop-seconds hand. The rattrapante hand is lacquered completely in red. This watch comes on a black leather strap with white stitching. 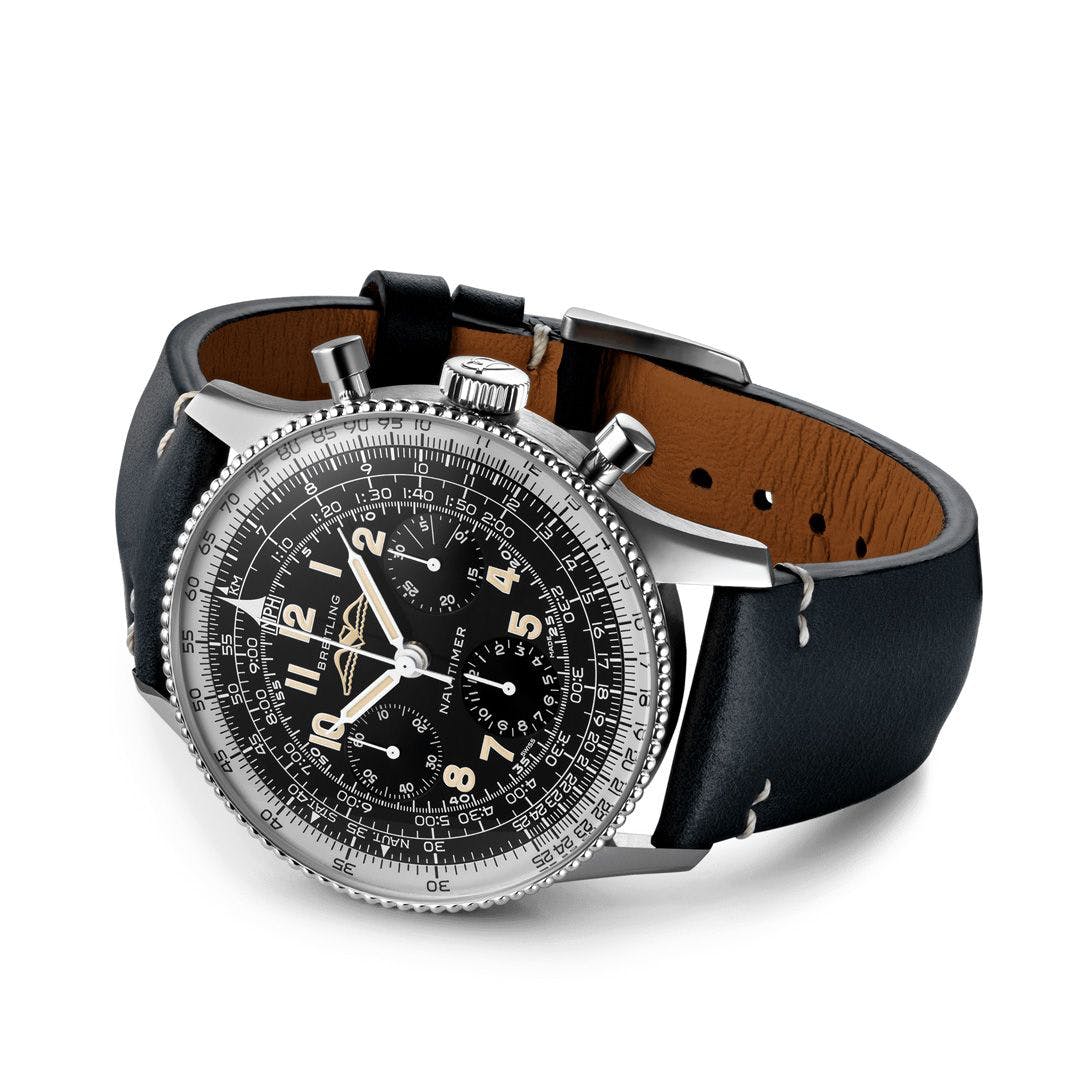 Perhaps one of the most interesting Navitimers is the reference AB0910371B1X1. Behind that cryptic string of numbers and letters lies a perfect facsimile of the Navitimer 806, which Breitling first introduced in 1959. The case is made of stainless steel and – just like the vintage model – is 41 mm in diameter. Both the dial and subdials are black – only the slide rule is white. The Arabic numerals are made of artificially aged SuperLuminova applied directly on the dial. The hand-wound mechanical caliber B09 completes the watch.

About the Calibers and Breitling’s In-House Movements

The featured caliber has a major influence on the price of a Navitimer. Models with certain calibers are in higher demand than others and generally a lot more expensive. In the early models starting from 1952, Breitling used manual movements from Swiss suppliers. The first reference, the 806, was usually outfitted with the well known Venus 178, for example. This caliber also appears in other models like the Top Time. Over the decades, hand-wound ETA movements also came into play, the most famous of which are the Valjoux 72 and the 7740. The latter was responsible for the first Navitimer with a date function.

In the late 1960s, Breitling introduced the automatic Navitimer. It runs on the famed Chronomatic caliber.This movement, developed by Willy Breitling, Jack Heuer, Büren, and watchmaker Gérald Dubois, features an incorporated chronograph module. The 1990s saw the addition of the popular Valjoux 77 family of automatic movements. 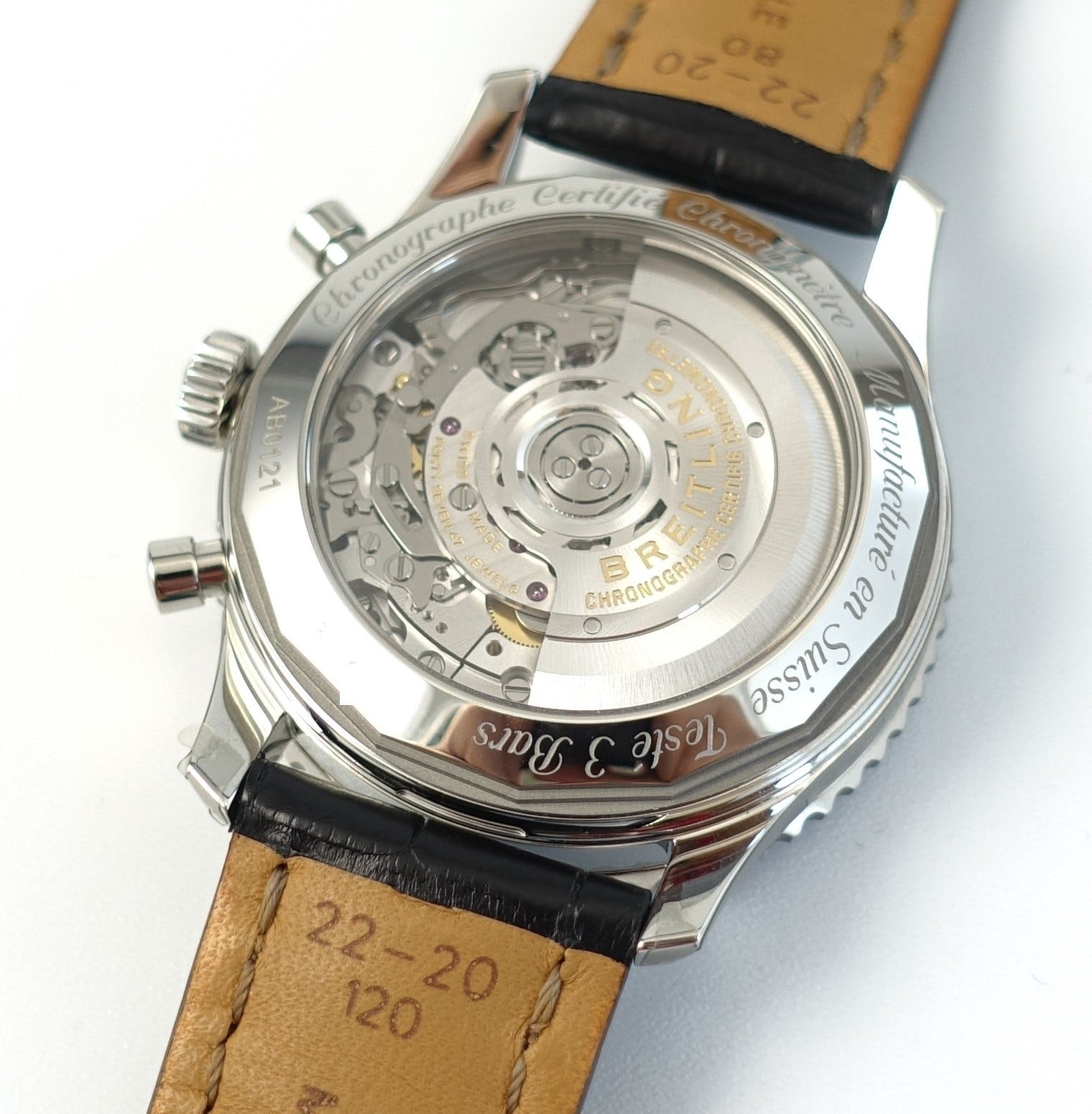 In 2009, everything changed regarding the movement supply chain. That’s when Breitling presented their first in-house caliber under the name B01. Since then, they haven’t stopped developing different takes on the movement. Over the years, Breitling has come out with variations including B04 (GMT function), B05 (world time function), and the manual caliber B09, as seen in the 806 Re-Edition. The chronographs make use of a column wheel with vertical coupling. The B02 is a three-hand movement based on the Tudor MT5612. The movements are manufactured in the Breitling Chronometrie in the Swiss city of La Chaux-de-Fonds. All calibers have a power reserve of approx. 70 hours and come with chronometer certification from COSC (Contrôle officiel suisse des chronomètres).

The Navitimer 8 line followed in 2018. For this watch collection, the company abandoned the distinctive slide rule bezel. The result is a tidier dial that gives these Navitimers a more elegant overall appearance. In addition to chronographs with the in-house caliber B01, this line includes three-hand watches, world time watches, and day-date variants, all powered by trusted ETA calibers. In 2020, Breitling added three-hand models with a diameter of only 35 mm to their repertoire. These Navitimers are available in various material and color combos and are primarily geared toward women.

The performance of any given Breitling Navitimer strongly depends on the reference. Rare models – in particular those in the vintage category – show a significant increase in value compared to their original sales price. However, it’s uncertain whether the same will apply to current models. In any case, it’s safe to say that Navitimer prices are relatively stable. When purchasing, you can look for low-priced unworn specimens, or keep an eye out for a slightly used watch in like-new condition. If you’re considering a future resale, it would be wise to purchase a full set, complete with accessories and the corresponding papers.

Depending on the model and adequate maintenance, you can generally count on a decent resale price, even after a few years of wear. Like many commodities, watches are also subject to the forces of supply and demand, so limited editions are typically more lucrative due to their rarity.

Prices for the Navitimer 1 and GMT 46

What the Navitimer B03 Rattrapante Costs

As previously mentioned, Breitling used basic movements from various Swiss suppliers up until 2009. The price for an early Navitimer often depends on the movement within. Collectors and enthusiasts are particularly interested in the very early models from the 1950s and 60s, including reference 806. Most of these watches run on the Venus 178 caliber or the rare Valjoux 72. Prices range from $3,400 to $11,500, depending on the movement, condition, and whether original accessories are included. If you’re interested in an early Navitimer with an automatic caliber, you should keep an eye out for the Chronomatic variants from the 1960s and 70s. You’ll find prices for these watches between around $2,800 and $11,300. 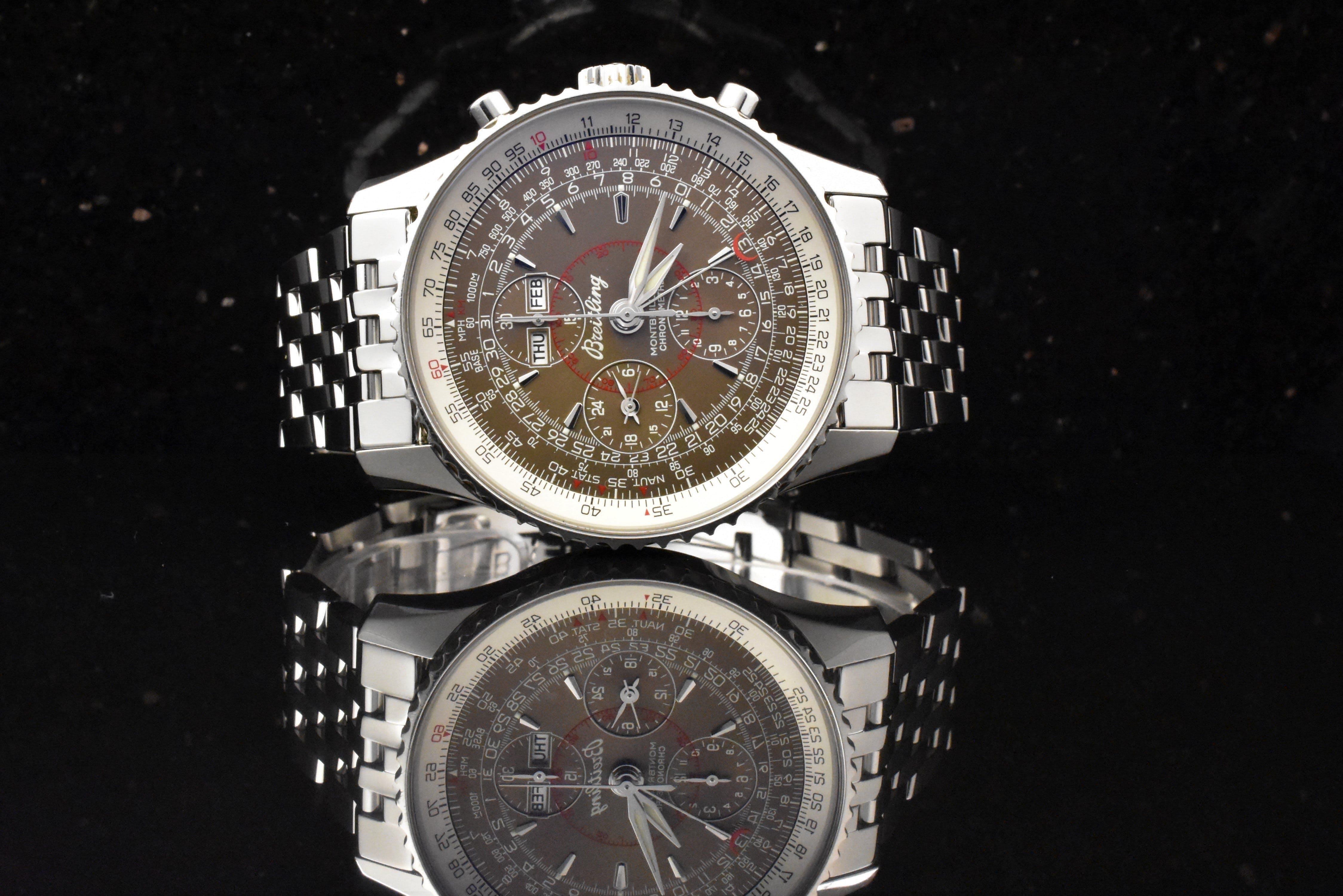 The Navitimer Montbrillant Datora with reference A21330 is one of the neo-vintage models. It is fitted with the Breitling caliber 21 (based on the ETA 7751) and differs from the standard models in some respects. Most notably, it features a day-date display at 12 o’clock and an additional hand on the dial for the date display. If you’d like to purchase this watch used, be prepared to spend around $4,000.

I've been using Chrono24 for years to buy and sell watches, as well as for research purposes. I've had an infatuation with watches for as long as I can remember. As a …

The Grandfather of the Modern Chronograph Movement: Seiko 6139