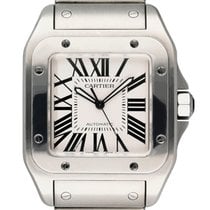 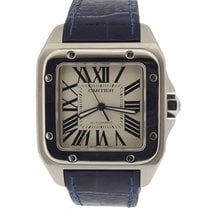 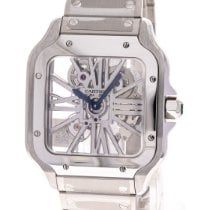 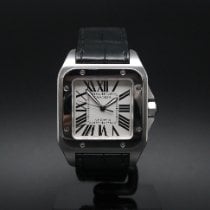 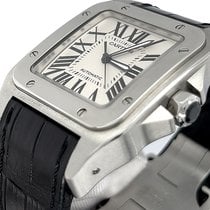 The Safest Path to Your Dream Watch

The Cartier Santos 100 is the modern version of the world's first pilot's watch. At 51 x 41 mm, this square luxury watch is a rather distinct accessory that puts a sporty twist on a classic design.

In Honor of the Santos' 100th Anniversary

Cartier introduced the Santos 100 in honor of the Santos' 100th anniversary in 2004. A century earlier, the original Santos had made watchmaking history as the world's first pilot's watch.

The Santos 100 stands out due to its size. At 51 x 41 mm, it has a much heftier and more masculine feel than its sister models. The seven-sided crown and prominent crown guard further underscore this watch's robust nature. However, despite all these differences, there's no mistaking the Santos 100 for anything other than a member of the Santos family. Its eight bezel screws, square dial with Roman numerals, and railroad minute track all come from the original Santos.

Cartier retired the Santos 100 in 2017. Over its thirteen-year production run, it evolved into a full-fledged collection with a wide range of timepieces. Its flagship model was the Santos 100 XL Flying Tourbillon with an in-house caliber and, of course, a flying tourbillon. Then there's the Santos 100 Skeleton, a skeleton watch whose movement's bridges form Roman numeral hour indices. The collection also contained chronographs and classic three-hand watches.

Prices at a Glance: Santos 100

Three-hand timepieces with a medium 33-mm case serve as the entry point into the Santos 100 collection. For example, you can purchase a stainless steel ref. W20106X8 on a leather strap for around 5,000 USD. If you'd prefer a stainless steel model from the XL line, you should keep an eye out for the ref. 2656. It takes the medium edition's design and expands it to fit a 51 x 38-mm case. Plan to spend between 4,600 and 6,800 USD for this watch, depending on its condition. Then there's the ref. W2012U2, which features a bezel and bracelet coated with black rubber. This timepiece costs about 5,200 USD new and 4,400 USD pre-owned.

The ref. W20124U2 is yet another two-tone watch. It combines an 18-karat rose gold case with a black DLC-coated bezel. The letters "DLC" stand for "diamond-like carbon." This material is especially robust, scratch-resistant, and impact-proof. A black dial with golden indices and hands completes this watch's refined look. Well-maintained pieces change hands for roughly 16,000 USD.

Fans of solid black timepieces should take a closer look at the ref. WSSA0006. A black ADLC coating covers its case and bezel, while a black dial with white Roman numerals displays the time. The central second hand stands out thanks to its bright red hue. Luminous material fills the steel sword hands, and sapphire crystal protects the dial and hands from the elements. Known as the Cartier Santos 100 Carbon, this watch gets its power from the in-house caliber 1847 MC. This automatic movement is named after the company's year of foundation. It has a 42-hour power reserve, a stop-seconds mechanism for setting the time to the exact second, and a balance frequency of 28,800 vibrations per hour (vph). A never-worn Santos 100 Carbon will set you back around 6,700 USD, while a used watch in good condition demands about 5,600 USD.

An In-House Caliber and Tourbillon

In 2013, Cartier released a Santos 100 XL model with an in-house caliber and flying tourbillon. This timepiece measures 54.9 x 46.5 mm and is available in white or rose gold. Its movement is the manual 9452 MC with a 50-hour power reserve. This caliber features a tourbillon at 6 o'clock, which also doubles as a small seconds display. Finally, one of the tourbillon's bridges is shaped like a "C."

Prices for a Santos 100 XL Tourbillon vary greatly depending on the exact model and its condition. For example, you can purchase a mint-condition ref. W2020019 in rose gold for as little as 63,000 USD. The same watch sells for about 41,500 USD used. The rarer ref. 323118026NX with a white gold case and diamond-studded bezel requires an investment of more than 240,000 USD.

The Santos 100 collection was also home to several chronographs. One example is the stainless steel Santos XL Chronograph ref. 2740. Its case is 55 x 41 mm and houses the automatic caliber 8630 MC, a modified ETA 7753. This movement comes with a minute counter at 3 and an hour counter at 6 o'clock. It also has a small seconds at 9 and a date display between 4 and 5 o'clock. Never-worn pieces change hands for around 13,500 USD, while used watches cost significantly less at approximately 6,200 USD.

Cartier also produced an "iced-out" model under the reference number W20090X8. It is technically identical to the standard edition but for the abundance of diamonds on its case, bezel, and crown. Prices for this watch range from 7,500 to 16,000 USD.

The Santos 100 Chronograph ref. W2020004 combines timeless elegance with the sporty character of a stopwatch. Cartier crafted its case out of titanium, which they finished with a black DLC coating. The dial and crown are also black, while the rose gold bezel, pushers, hands, and indices offer a nice sense of contrast. A black textile strap underscores this timepiece's sporty aesthetic. You can call this watch your own for about 10,500 USD new and 7,000 USD pre-owned.

Some of the Santos 100 collection's most exciting timepieces are its skeletonized models. Instead of a classic dial, Cartier used the movement's bridges to form large Roman-numeral hour markers at 3, 6, 9, and 12 o'clock. Sapphire crystal on the front and back provide a view of the in-house caliber 9611 MC at work from every angle. This manual movement has a 72-hour power reserve.

The case of the Santos 100 Skeleton is made of 950 palladium, while its hands are tempered blue steel. A black alligator leather strap with an 18-karat white gold buckle keeps the watch securely on the wrist.

You can get this skeletonized luxury watch for about 33,000 USD in very good condition and 48,500 USD new.

The History of the Cartier Santos

Cartier designed the square Santos for the Brazilian aviation pioneer Alberto Santos-Dumont, a vibrant personality from the early 20th century who stunned Parisians with his airships and other aircraft.

Pocket watches were still the norm at the time, and as a pilot, Dumont found them very impractical. In order to read the time while in the aircraft, he always had to take his hand off the controls. This led him to call for a wristwatch that he could wear while flying. Cartier made his dream come true with the Santos in 1904. Two years later, Dumont wore the watch during the first official public motorized flight.

Demand for the Santos took off immediately – so much so that it entered series production in 1911. Since then, the Santos has evolved into an impressive collection and remains an integral part of Cartier's catalog to this day.